An article by The Economist on Twitter caught my eye a couple of days ago.

It shows that the wealthiest 0.1% of Americans control around 22% of the nation’s wealth — almost exactly the same proportion as the bottom 90% of citizens. This hasn’t happened since the late 1930s and the article seems to be lamenting the passing of a period where wealth was more evenly distributed.

One problem here is that there probably isn’t any really good data on income or wealth inequality going back further than the early 1900s; because I’m pretty sure that if there were, we’d see that the post-WW2 period was the outlier. 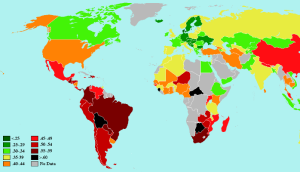 I’m not too concerned about the Paris Hiltons of the world…. “rags to riches and back again in three generations” comes to mind; I’m sure they’ll fritter it all away if they’re not smart enough to look after it — or their parents will follow Warren Buffet and give it all away rather than passing it to his offspring.

At the other end of the spectrum though, think about the technology sector, for example. Innovations like Apple’s App Store have made application development tremendously accessible: it’s literally now possible for a team of maybe half a dozen teenagers with a good idea and some coding skills to put together an app in a relatively short space of time that could gross tens or even hundreds of millions of dollars in revenues. Not every app is going to succeed, but how many pursuits were there in, say 1965 (when I was born) where someone potentially without any formal qualifications and with very little capital could make that kind of money?

On a slightly larger scale, look at Finnish game developer SuperCell. Following $12mn of VC investment in 2011, they developed two games, one of which was Clash of Clans — an app that grossed nearly $900mn in 2013. I don’t know how many employees they had in 2011-12 when the game was developed, but I’ll bet it was a pretty small core development team.

To me, this is a kind of democratization – literally with nothing but a laptop and an idea, it’s possible for a talented coder anywhere in the world to come up with something pretty awesome and sell it globally. Of course, if they succeed they will make a ton of money and in doing so “mess up” the Gini coefficient; but honestly, who’d want to live in a world without that possibility?