There was significant controversy recently over the UK government’s decision to allow the Weald of Kent Grammar School in Tonbridge to open an ‘annexe’ in Sevenoaks, 7 miles away. Opponents argue that this is a new school, even though the 8 minute journey time (by train) is far less than some pupils currently spend getting between scattered units of some schools that supposedly have a single site. The school will offer places for 450 girls.

I have long been a supporter of selective schools — having benefited from a Grammar School education myself, I feel it would be at the very least hypocritical for me to oppose allowing others to enjoy the same opportunities. Most Labour MPs, sadly, disagree: the go-ahead for Sevenoaks was described as a “hugely backward step“. Yet many Labour MPs were themselves beneficiaries of this system and might well not have been in a position to enter politics otherwise.

Selective education is a political hot potato. There are a number of issues generally raised:

I think this last point is the most interesting. When I was getting ready to take the 11+ in the mid-1970s, there were no private tutors parents could turn to: one day, we took the test and then we hoped for the best. These days, there’s an entire industry focused on serving parents: some kids have years of private tuition before taking the 11+… even if they’re already attending private school! Middle class parents have reacted rationally to a ‘market incentive’ — grammar schools are scarce, good & free – Tonbridge’s GCSE results see 99% getting five A*-C grades compared with 63% nationally. But this is eminently addressable:

Let’s look at two graphics. The first, from Oxford University, shows social mobility as measured age 27 for four cohorts. Note the substantial drop in upward mobility between the 1946 cohort and the 1980s one, for both men and women: 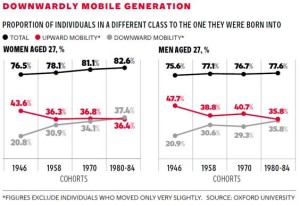 Now, let’s have a look at the number of grammar schools in UK over time (from BBC):

I’m sure there are many explanations but for me, one of them is that England went from educating 25% of its young people in grammar schools, to giving just 5% the same opportunity.

This is political dogma preventing smart kids from getting a good start in life. It’s got to stop.